The University of Maryland, Baltimore (UMB) held a forum on June 19 to share the work being conducted across disciplines to better understand, treat, and modify the impact of chronic pain.

Held in Baltimore at the Radisson at Cross Keys, a community conversation was moderated by Joel Greenspan, PhD, co-director of the University of Maryland Center to Advance Chronic Pain Research (CACPR).

The multidisciplinary center is composed of nationally and internationally renowned clinical and preclinical translational scientists. The principal research focus of CACPR members, several of whom participated in the forum, is on the physiological, genetic, and psychosocial underpinnings of the development and persistence of debilitating chronic pain conditions.

Greenspan, professor and chair of the University of Maryland School of Dentistry (UMSOD) Department of Neural and Pain Sciences, characterized chronic pain as a high-impact, complex problem affecting the quality of life of millions of U.S. residents who are kept from doing the things they need or want to do. “We’ve got a wide swath of talent,” he said, referring to UMB’s top-tier scientists and clinicians, adding that such breadth is needed to continue making progress. 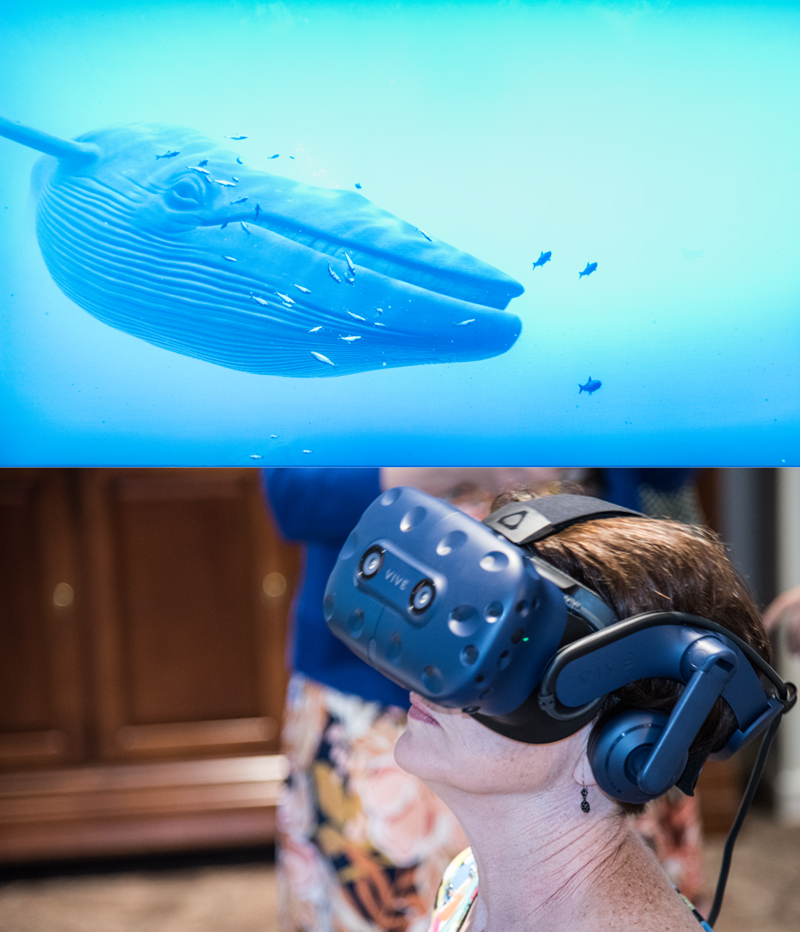 Renee Gruel, CRNP, experiences a marine setting that features a whale during a virtual reality demonstration conducted by members of the laboratory of Luana Colloca, MD, PhD, MS, associate professor at the schools of nursing and medicine.

Hoffmann said that since 1997 she has been studying and writing about legal obstacles to the treatment of pain, more recently about laws passed to address an opioid epidemic marked by increased overdose deaths. Laws in some states codify parts of a prescribing guideline issued in 2016 by the Centers for Disease Control and Prevention (CDC). “Many physicians have stopped seeing chronic pain patients or tapered them off involuntarily, literally abandoning them.” she said.  “This kind of abandonment can be grounds for malpractice or action by state medical boards.” In some cases, it has led to suicides, she added.

In response, Hoffmann and colleagues published an article about the situation and she and other pain-treatment advocates urged adoption of more compassionate tapering, among other things. In April, she noted, authors of the guideline recently advised against its misapplication that can risk patient health and safety, publishing a commentary in a prominent journal. “I’m hopeful this is a first step in efforts to rectify overzealous application of the CDC guideline,” she told the group.

Keller described an initiative of the University of Maryland Strategic Partnership: MPowering the State that supports both professionals in the field and university students across disciplines. “Clearly what is needed is a much more rational approach to pain management in general and to opioid prescription in particular. We are addressing this issue at all the schools on campus,” he said, describing ways of imparting knowledge necessary to apply this rational approach.

Keller also outlined other efforts such as a “cuddling” initiative to help babies who are in misery after being born with neonatal abstinence syndrome. These infants, born to mothers who used opioids during pregnancy, fare better if provided skin-to-skin contact. “It’s very low cost, very low-tech,” he said.

Romero-Reyes said her focus is to provide evidence-based pain management for facial pain. There could be multiple causes, including the teeth and also encompassing causes that masquerade as dental pain. “As a clinician, I have the opportunity to see firsthand the needs of this patient population,” she said. “As a scientist, I’m able to translate those needs to research questions,” such as current studies on overcoming neuropathic pain.

Colloca asked the group, “How can we manage pain?” Demand is great for solutions beyond opioids, and a patient’s own mindset could be part of the solution. Colloca suggested that patients be asked to describe their pain levels not as a number, ascending from mild to severe, but rather as a ranking of everyday activities they can do. One approach is to help people increase tolerance of pain, perhaps by stimulating the brain to produce natural substances or by distractions such as a virtual concert.

At the outset, guests at the event had a chance to try virtual reality as a potential distraction. Several took part in a demonstration in which a headset took each individual to a undersea setting where a whale loomed overhead. Members of Colloca’s lab were eager to show off its research, which is also supported by MPowering the State.

Guest Renee Gruel, CRNP, a nurse practitioner at the University of Maryland Medical Center who specializes in anesthesiology, declared the virtual reality “engrossing” as she experienced a marine setting being tested as a distraction. “You know it’s not real but it’s very convincing.”

During a question-and-answer session to conclude the event, guests shared observations and problems of their own or of family members who struggle with chronic pain. Patient Dante Wheatley was accompanied by his mother, dental assistant Kim Jones, and by her employer, Willie Richardson, DDS, who all spoke of how chronic, acute pain has impacted Wheatley’s daily life.