From pain to memory, researchers investigate how VR can make things go better in the real world 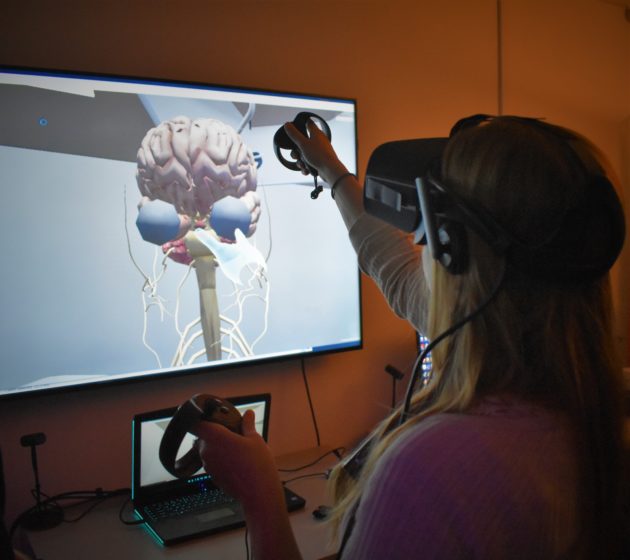 COLLEGE PARK, Md. — Can being in the middle of an opera take your mind off pain?

Here at the University of Maryland, scientists are studying the therapeutic value of experiencing a virtual-reality recording of Francis Poulenc’s “Dialogues of the Carmelites.” The hope is that, at least in some situations, the distraction of an immersive virtual experience can provide pain relief without having to turn to opioids.

To see whether the idea could work, a research team recorded a performance of “Dialogues” in VR from three vantage points, including a 360-degree camera mounted right on the stage. Headset-wearing users can switch between the vantage points to experience the opera as if they were watching from the orchestra pit or standing in the midst of the action. The experience can be far more powerful than merely listening to audio or watching a video.

“We are working to see how far we can take this,” Varshney said.

The opera-vs.-opioid experiment is just one of several projects aimed at seeing whether being immersed in a 3-D virtual world can make things go better in real-world situations.

Based on the results from other experiments, the tentative answer is yes. For almost two decades, researchers at the University of Washington have been working on a VR environment called “SnowWorld” that helps burn victims take their minds off their pain by throwing virtual snowballs at virtual snowmen and other cartoon characters.

Virtual reality’s real-world benefits aren’t confined to pain management: In a study published in the journal Virtual Reality, University of Maryland researchers found that presenting 22 pictures of celebrities’ faces in a structured virtual environment helped experimental subjects recall which face went where when it came time to test their memory.

“The recall was 8.8 percent better in the headset, compared to the desktop,” Varshney said. Such techniques could make memorization easier in future educational settings.

Medical training is another area that could benefit from virtual-reality tools. For example, one of the startups supported by the University of Washington’s CoMotion Labs, known as Anatomy Next, has developed a suite of books, VR software and desktop applications to help students wrap their brains around human anatomy. Using VR headsets, students can examine a virtual human body layer-by-layer, do digital dissections and identify anatomical features in a standardized “pin test.”

Researchers at the University of Maryland are working on similar tools, including an augmented-reality system that makes use of Microsoft’s HoloLens headset to project diagnostic imaging data directly onto the surgeon’s view of a patient lying on the operating table. The system is undergoing testing at the Maryland Shock Trauma Center in Baltimore.

“Right now, the surgeon has about 20 displays all around them, displaying various physiological parameters … It’s very hard for the surgeon to look up, look back down, and keep the flow going,” Varshney explained. “Using augmented reality, one can have the localization be done very precisely. There are lots of procedures this could be used for.”

Varshney said he and his colleagues at the Maryland Blended Reality Center’s Augmentarium lab are also working on easing the “cybersickness” that’s often associated with virtual reality.

He estimated that roughly a third of the population is very susceptible to VR-induced nausea. Another third can handle it just fine, leaving the people in the remaining third somewhere in the middle. That’s a big drawback, considering that analysts say the market for augmented-reality and virtual-reality applications has the potential to amount to tens of billions of dollars by 2022.

Researchers have identified several strategies for reducing the risk of VR motion sickness, ranging from having the right refresh rate for headset displays (90 Hz seems to be the current standard) to limiting camera movements that may contribute to inner-ear dissonance. (A high-tech twist known as galvanic vestibular stimulation may also help.)

Varshney said he was encouraged by Magic Leap’s development of a headset system that incorporates multiple display layers, which gives VR users more of a sense of depth and aims to head off a visual perception problem called vergence accommodation conflict.

When I tried on a VR headset to experience “Dialogues of the Carmelites” from three perspectives, I experienced none of those problems — which came as a relief to this opera fan. But if researchers really plan to help patients ease their pain by putting them on a virtual stage, they might want to consider a different opera. Let’s just say that the story doesn’t end well for the Carmelites.

Last week’s tour of the Maryland Blended Reality Center was one of the field trips offered in conjunction with the ScienceWriters 2018 conference in Washington, D.C. GeekWire’s Alan Boyle is the president of the Council for the Advancement of Science Writing, which is one of the organizers of the annual ScienceWriters event.