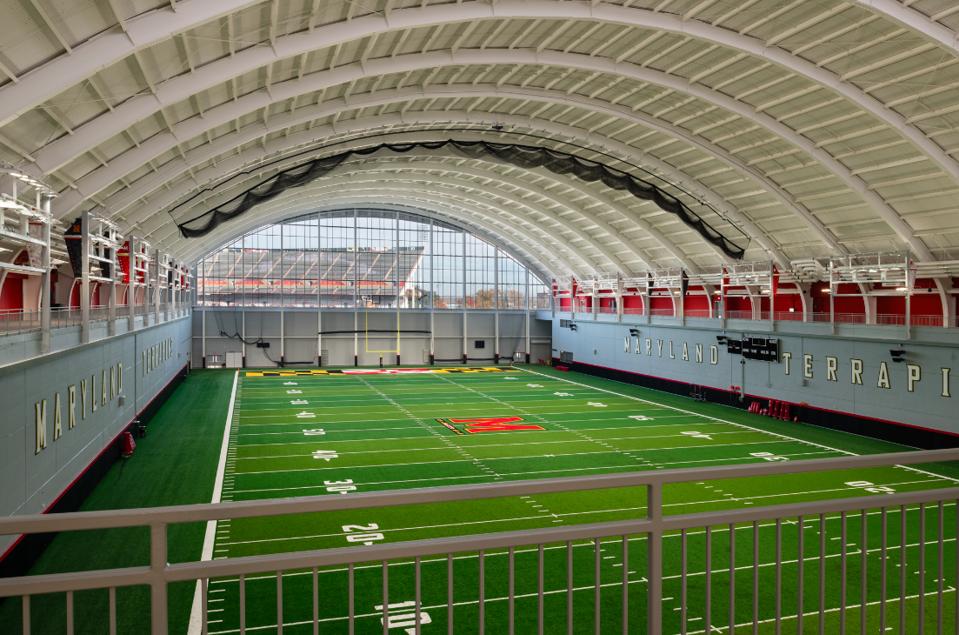 Located in the heart of the University of Maryland, directly on Campus Drive, Cole Field House represents something new in how sports and education intertwine on campuses across the country.

Not only does the complete remaking of the structure include all the amenities a school now a member of the football-rich Big 10 Conference need to compete in recruitment and training from an athletics point of view, but the fresh face of the Cole Field House, designed by Cannon Design, does something additional by merging sport, health, science, wellness and entrepreneurial education into one facility.

“I think we are at the beginning of this new trend with the combination of athletics, sports medicine and the introduction of more sports science and technology into the training of athletes,” says Eric Einhorn, Cannon Design’s Washington, D.C., sports market leader. “This facility is one of the few trendsetters out there, but we will see a lot of other athletic departments want to have this in the near future.” 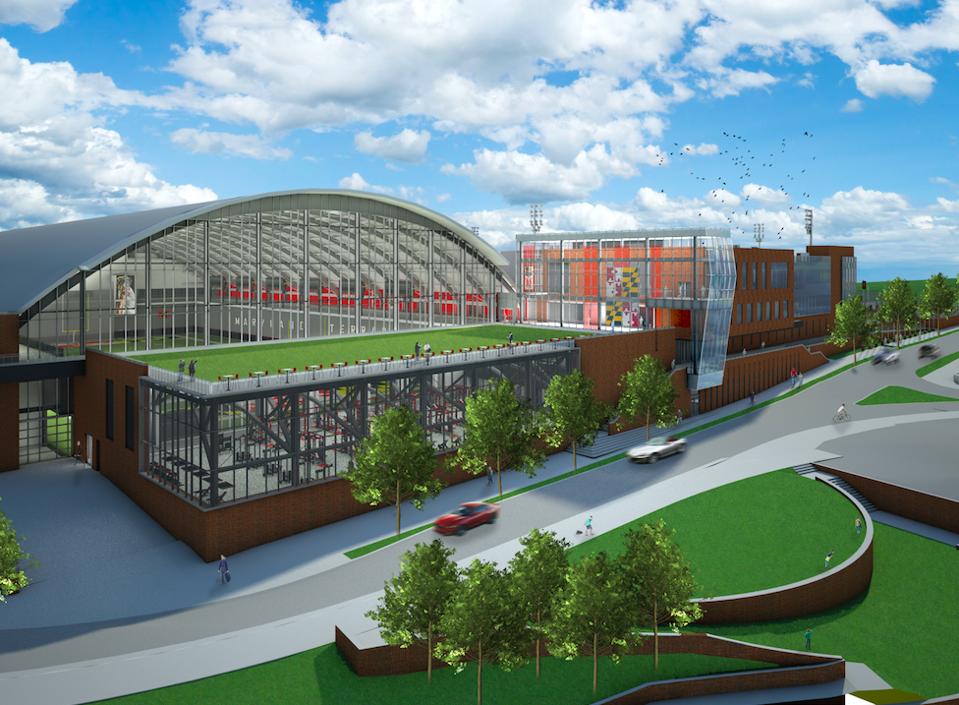 The Cole Field House on the campus of the University of Maryland will be plenty more than just football training when fully complete.  CANNON DESIGN

The phased remaking of the facility takes the historic basketball arena — it has hosted everything from Final Four games to Elvis concerts — and turns it into a full-sized indoor football field. Along with two outdoor fields nearby, the building includes strength and conditioning, hydrotherapy, locker rooms, team meeting spaces, coaches’ offices and a player dining facility. Also locating inside is the Center for Sports Medicine, Health and Human Performance, an orthopedic clinical treatment center and the Academy for Innovation and Entrepreneurship.

“This was something the university envisioned and something we are seeing more and more of,” says Roland Lemke, Cannon Design’s Washington, D.C., office practice leader, “the desire to bring athletics, research, clinical operations as well as entrepreneurial academies all together in one building and build upon each other.”

As Maryland works to foster potential connections to industry and academics, athletics provides both the science research and the space to allow them to work together. “That is what is pretty different about (Cole),” he says, “bringing all of those together under one roof.” 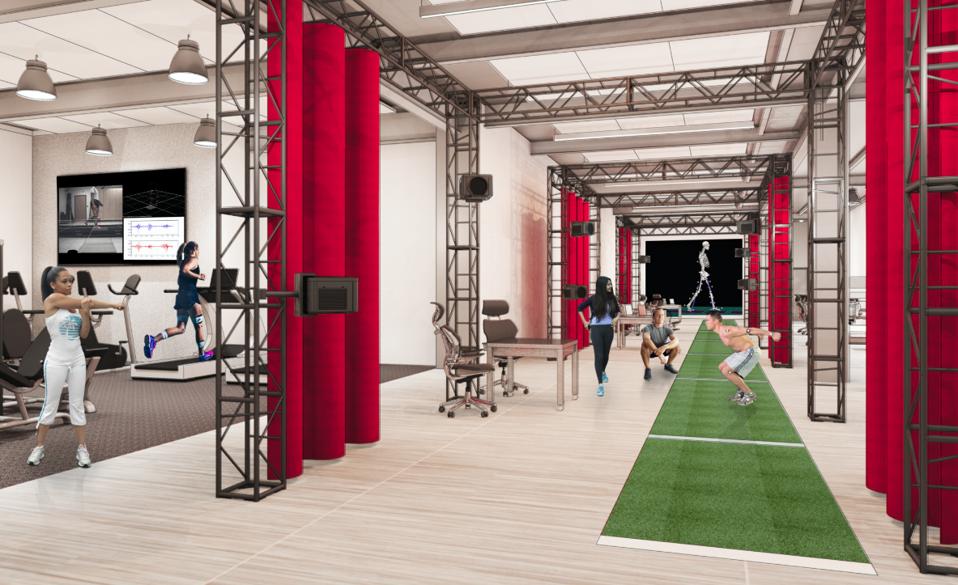 But getting there required a complete overhaul of everything under that roof.

The Cannon Design team first took an old basketball arena and transformed it into one of the tallest indoor football practice facilities in the country. The architects believed that structurally, between the existing columns and arcing roof support, they had the perfect dimensions for indoor football. They just needed more length, so crews blew out the north end, making the building 80 feet longer, replicating the columns and beams.

With the arena change in place, the additional functions of the facility mainly wrap around the west and north side of the building with entrances to Cole Field Houseeither through the old arena or the new entrance to the north. With views into the football space from throughout the building, ultimately the reimagined Cole Field House turns into a four-story building engaging the arena on three levels.

Merging academic and athletic endeavors into one venue not only blurs the architectural line between the two but allows for crossover research. “The expanded technology and resources in Cole Field House will allow analysis from molecules and cells to circuits and systems leading to a more complete insight into how the brand reacts to and recovers from trauma,” says Dr. Elizabeth Quinian, MarylandDepartment of Biology professor and scientific co-director of the Center for SportsMedicine, Health and Human Performance.

Kevin Plank, Under Armour founder, helped pay the way on the project, so was key in helping shape the athletic vision of Cole Field House and that meant a “more dynamic,” yet traditional façade facing Campus Drive. While not yet complete, the new entrance and three-story atrium will have plenty of football storytelling and branding for the University of Maryland. 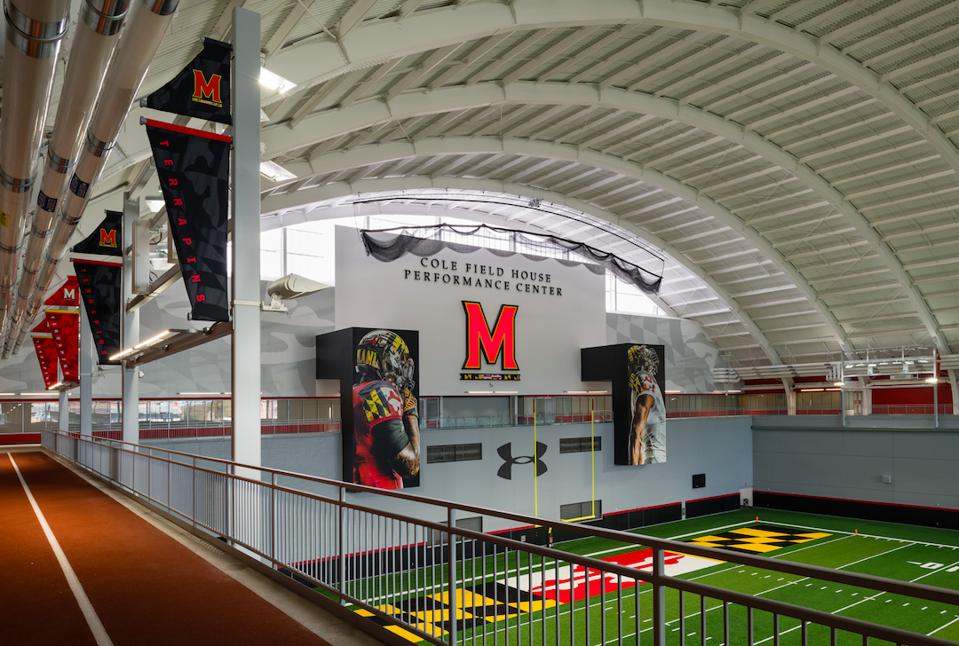 Located next to the on-campus home of Maryland Terrapins football, Maryland Stadium, Cole Field House takes on a pedestrian-friendly glass façade facing the stadium from the new north end and then ties directly to the stadium with a new player entry opening for the 2019 season that runs beneath the locker room into a tunnel under a road and directly into the stadium. The north façade of the building even incorporates views into the stadium from a new roof deck that opens on gamedays. “The south was a contextual response to traditional campus design,” Lemke says, “the north was where the jazz is.”

Part of this new tunnel entrance includes players entering the stadium from a terrapin shell. “The gameday experience was a huge part of the design,” Lemke says. “Many schools have traditions of running down a hill or this and that, the tradition of coming out from under a terrapin shell and onto the field will offer a much more dramatic entry onto the field.”

With a 200-foot-long tunnel — like an ambilocal cord, Lemke says —the locker room and field remain completely connected.

The indoor practice facility opened last year and the new tunnel entrance debuts for the 2019 season during a home game against Howard on Aug. 31, all part of the footballteam using the athletic-focused aspects of the building. The outdoor turf fields need to grow in and will be ready for 2020, while the academic portions of the building remain a work in progress.

“We think it is going to be amazing for the university,” Lemke says. “We think they are really trying to hold true to the original intent of the building.” And along the way, Maryland leads the trend of athletic support facilities putting a focus on more than just athletics.