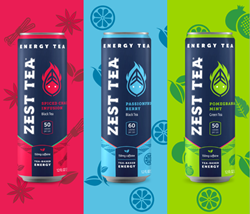 Zest Tea, maker of high-caffeine tea beverages, has secured $1 million in a funding round led by Maryland based Momentum Fund and Lord Baltimore Fund. The round also included various angel investors. The funding round comes on the heels of the company’s newest product launch, a line of flavorful iced tea energy beverages, which joins their existing line of bagged teas. All of Zest Tea’s blends contain about three times more caffeine than traditional teas, putting them on par with energy drinks and coffee. The teas also contain L-Theanine, a rare amino acid that has been shown to produce a more steady and prolonged alertness.

Zest Tea’s 2014 groundbreaking launch of high energy bagged tea without the negative side effects of coffee earned recognition as the industry’s best new product at the World Tea Expo. Initially sold exclusively online to phenomenal reviews and growth, in 2017 Zest Tea entered the retail store market and is now available in nearly 2,000 locations across the US including chains like Harris Teeter, Safeway, Winco, HEB and others. In response to demand, Zest Tea has recently launched a canned sparkling iced tea line which is rolling out in Mid-Atlantic 7-Eleven locations, with many additional Northeast retail placements to be announced in the months to come. This new line has been named a finalist for the prestigious BevNet Live New Beverage Showdown, highlighting the top new products in the Ready-To-Drink (RTD) category.

“It’s been over 20 years since energy drinks landed in US stores, but no one has managed to successfully blend health, flavor and functionality. After a year of tweaking and improving formulations, we believe we’ve finally cracked that code and the response from our customer base has been incredible. This infusion of funding from Momentum Fund and Lord Baltimore gives us the ammunition we need to fuel rapid expansion and push Zest to the forefront of the rapidly expanding clean energy segment,” said James Fayal, founder and CEO of Zest Tea.

“Zest Tea’s new canned, ready-to-drink flavored teas are expanding into major distribution channels and were identified by 7-Eleven, one of the largest beverage retailers in the U.S., as an emerging brand to watch. The product is beautifully branded, and the founder, James Fayal, is one of the most impressive startup CEOs that we have encountered,” said David Wise, director of the Maryland Momentum Fund.

In addition to retail channels, all of Zest Tea’s products are available on their website ZestTea.com and Amazon. For more product and company information: http://www.zesttea.com.

About Zest Tea
Winner of Best New Product at the World Tea Expo, Zest Tea offers the same energizing kick of coffee without the negative side effects. Every Zest blend has as much caffeine as coffee – 3X more than traditional tea – and amino acids shown to reduce the jitters and crash associated with other caffeinated products. Zest is a top selling Amazon tea brand and is available in over 2,000 stores nationwide. For further information about Zest Tea, contact Cou Kalantary at cou@zesttea.com or (571) 308-9673.

About the USM Momentum Fund
The Maryland Momentum Fund is a new initiative of the University System of Maryland (USM) to provide late seed investment funding for promising technology ventures that come out of any of the twelve constituent USM institutions, its research parks, and its students, faculty, or graduates. With a $10 million commitment from the System already in place, the Fund is collaborating with UM Ventures (a joint initiative of the University of Maryland, Baltimore and the University of Maryland, College Park to commercialize technologies and expand industry collaboration) to reach out to area venture capitalists and angel investors for additional funds. For further information about the Maryland Momentum Fund, contact David Wise at dwise@umaryland.edu or (410) 706-3361.